One day in the spring of 2014, Heidi Scott’s face went numb. Out-of-nowhere, just-returned-from-the-dentist numb, as she vividly remembers.

“I was on a business trip and it took me completely by surprise. My entire face was affected,” Heidi says.

Alarmed, she returned home to see her doctor, who ordered a battery of tests. The results were inconclusive. 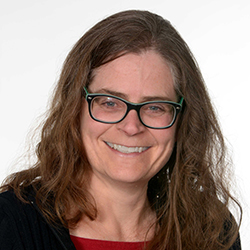 Heidi was in her early forties, a runner and in good health. Her doctor said she could expect to make a full recovery, and eventually she did. After a month or two, she regained the feeling in her face.

“Once I was back to normal, the incident felt kind of unreal, like, did that really happen to me?” she says.

A year later, the numbness returned. This time it spread through Heidi’s ear, down the side of her neck, and into her shoulder. There were muscle spasms and spells of intense fatigue. An ear infection was ruled out, as were various nerve issues. Again, the symptoms resolved, and again, Heidi was left to wonder what was going on.

Within a few weeks, she began to struggle with balance and coordination, and slur her speech. Heidi worried that her colleagues at work might think she was drinking. She also worried that people thought the problem was all in her head, because the symptoms came and went. They were unpredictable.

An MRI finally confirmed that something was indeed wrong. The scan revealed tiny lesions, or ‘sclerae,’ in the white matter of her brain. She was referred to the Vancouver Coastal Health MS Clinic in the UBC Faculty of Medicine’s Djavad Mowafaghian Centre for Brain Health.

After careful consideration of her symptoms and test results, her doctors arrived at a diagnosis: multiple sclerosis (MS). MS is a progressive autoimmune disease that attacks nerve cells in the brain and spine, causing a bewildering array of symptoms.

At the MS Clinic, Heidi was able to access a treatment that helps to control the symptoms and slow the progression of the disease. Unfortunately, like most MS drugs, it’s a powerful immunosuppressant that also leaves her vulnerable to infection. Even a mild illness such as the common cold can be dangerous.

But there’s reason for optimism. New technologies and new research are opening up new possibilities for MS treatment and care.

“Truly, we’re in the midst of a golden age of biomedical innovation,” says Dr. Peter Zandstra, a professor in the UBC School of Biomedical Engineering (SBME) and an expert on stem cells and bioengineering. “It’s exciting, because the ultimate goal is to give patients their lives back.” 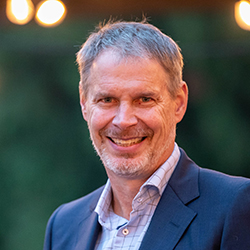 Researchers at the UBC Faculty of Medicine are working across disciplines to do just that. They’re developing novel therapies to control MS symptoms for more patients with fewer side effects, slow the progression of the disease — and even reverse the damage it causes to the nervous system.

And thanks to a new gift — the largest known donation ever for MS research, worldwide — UBC is poised to become a global hub for MS innovation, scaling up its team science approach to bring new and better therapies to patients sooner than ever before.

For the more than 90,000 Canadians living under the shadow of MS — and the 4,000 who receive a diagnosis each year — sooner can’t come soon enough.

Stopping a debilitating disease in its tracks

It’s the unpredictability of the disease that makes MS so difficult to diagnose, treat — and live with.

MS attacks and destroys myelin, the fatty sheath that covers nerve cells in the brain and spine. If you think of nerve cells as, together, forming the cables along which information (in the guise of electrical signals) travels through the nervous system, then myelin is the protective coating that insulates the cables, allowing the information to flow smoothly from place to place without interference. Your brain sends a message to your eyelid, telling it to blink, and it does, simple as that.

As myelin disappears, the nervous system begins to malfunction. Because MS attacks nerve cells seemingly at random, people with the disease can experience a wide range of symptoms. In one person, it might disrupt communication between the brain and the optic nerve, causing vision loss. In another, it might impair bladder function, or cause intense tingling in the hands and feet, even paralysis.

Symptoms come and go, especially in the early stages, and especially in patients with the relapsing-remitting form of the disease, like Heidi Scott. Left untreated, the disease can progress even during periods of apparent remission.

Today’s treatments are life-changing in ways good and bad. For Heidi, they allow her to live almost symptom-free with the assurance that the disease isn’t silently devastating her nervous system. But they also mean giving up the social life most people take for granted.

“I’m fortunate in that I work from home, so it’s easier for me to avoid everyday viruses that can make me very sick. But the side-effects of the treatment have had a tremendous impact. Not everyone understands the implications of being immune-compromised. I’ve fallen out with loved ones because I have to isolate,” she says.

It’s a difficult trade-off, and even then, the current treatments don’t work for everyone. For many patients, MS still means gruelling day-to-day symptoms and long-term disability. 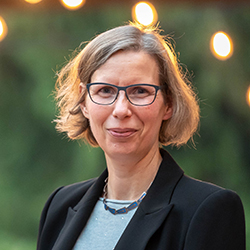 Dr. Megan Levings, a professor in UBC’s Department of Surgery and SBME, has developed a cellular therapy that promises to make immunosuppressant treatments more effective for more people. She leads a team of immunologists and cell engineers who have demonstrated that it’s possible to ‘train’ regulatory T cells (Tregs) — a type of immune cell that controls the body’s response to healthy tissues — to recognize and accept specific types of tissue that a malfunctioning immune system might otherwise attack.

“We want to do for MS what has been done for cancer,” she says. “We know, for example, that some types of T-cell therapies can be dialed up to help the immune system fight against cancer and infection. With MS, we want to dial down the body’s immune response that leads to disease.”

The goal is an immunotherapy that would control the specific and unwanted inflammatory response that, in MS, leads to demyelination — while allowing the immune system to function normally in every other respect. The hope is that MS patients will one day enjoy the benefits of the current treatments with few or none of the side effects.

Thanks to innovative bioprocess engineering techniques developed by Dr. Zandstra and other bioengineers, the therapy, if successful, could be manufactured at scale more readily than most therapeutics, making it quickly and widely accessible to patients as an off-the-shelf treatment. 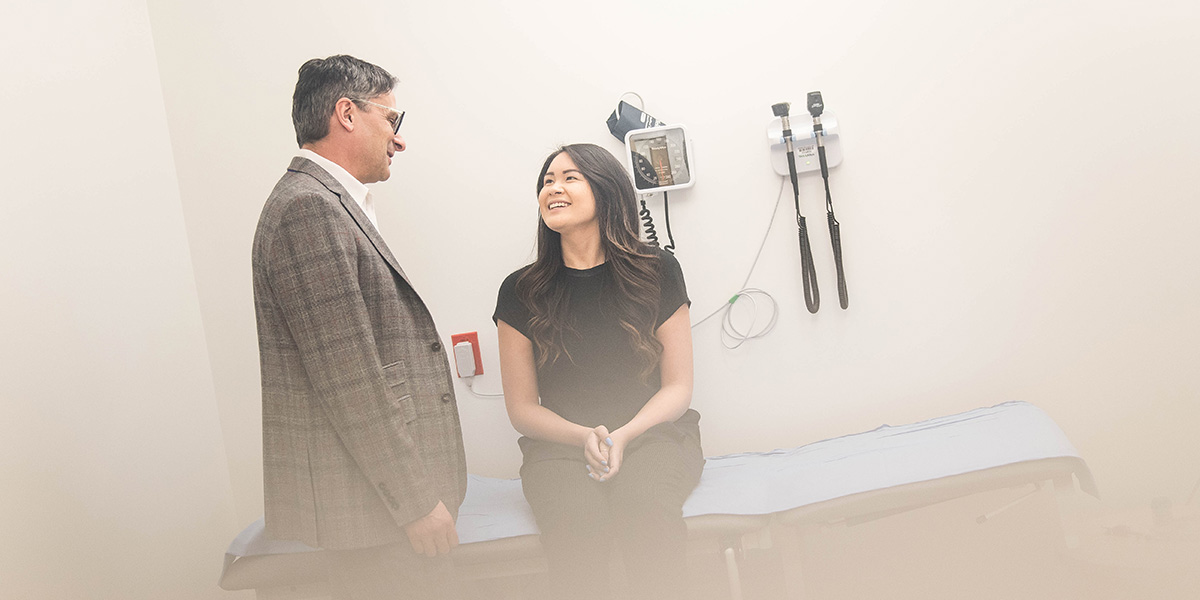 Dr. Anthony Traboulsee (left) consults with a patient at the VCH MS Clinic at UBC Hospital.

Repairing the brain — and restoring quality of life

For many MS patients, the bigger concern is restoring neurological function they may have already lost.

“It breaks my heart to see patients I’ve known since their diagnosis suffer with serious, progressive disability due to the current lack of treatment options,” says Dr. Anthony Traboulsee, a UBC clinical professor and neurologist at the MS Clinic.

Regenerative medicine may hold the key.

Dr. Freda Miller, a UBC professor and renowned neurobiologist in the Department of Medical Genetics, leads a multidisciplinary team of scientists from UBC and Toronto’s Sick Kids Hospital who are investigating the use of stem cells to repair the damage caused by MS.

Stem cells are the precursors to the specialized cells the body needs to function. Whether a stem cell develops into, for example, a blood cell, an immune cell, or a neuron depends on the signals it receives from its environment, in the form of chemical messages from the network of cells surrounding them.

“The beauty is that the brain contains reserves of neural stem cells. With the right chemical prompts, they can be converted into cells that produce myelin, replacing the ones destroyed by MS,” Dr. Miller explains. “If we can figure out what those prompts are, we can stimulate the brain to repair itself.” 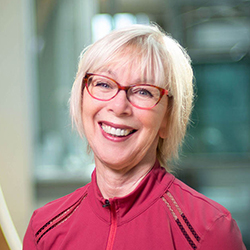 But to decode the messages that prompt a stem cell to become a myelin-producing cell, you have to cut through the noise of all the other communication happening in the cellular environment — a daunting task that requires multidisciplinary expertise and involves huge datasets.

This is where a team science approach makes the difference.

Dr. Miller also works closely with Dr. Zandstra. Neuroscientists from her lab collaborate with his team of physicists and biomedical engineers to model cell networks in three-dimensional space, which they use to formulate and test predictions about cell behaviour. Together the teams are creating a map of cell communication networks that could lead to a breakthrough treatment pathway for MS and other, similar diseases.

Dr. Miller believes her team’s research, if successful, could work in tandem with Dr. Levings’s immunotherapy to give patients a chance at recovery.

“In a perfect world, we figure out a way to regenerate the damaged areas, while our colleagues in immunology train the immune system to leave the new myelin alone,” Dr. Miller says. “It’s a one-two punch.”

The challenge with any breakthrough discovery, of course, is what comes next. Translating innovative research into an off-the-shelf treatment requires major investment and resources, including pharmacological expertise, clinical trials infrastructure, bio-manufacturing facilities, and much more.

It also requires time, which many patients do not have.

“In terms of disease progression, five or ten years is a very long time for the patients I see. By giving them the opportunity to participate in early-stage clinical trials for promising new therapies, we can give them a greater chance at success,” Dr. Traboulsee says.

With $33.8 million in new funding from an anonymous donor, UBC and its partners are establishing the MS Research Network, a world-class research and patient-care hub that will use the latest advances in cell and gene engineering to develop, manufacture, and test next-generation cell-based therapies.

“If we can stop the disease from progressing and help people recover even some of what they’ve lost, the impact on their quality of life would be quite profound,” Dr. Miller says. “The MS Research Network is an important step toward realizing that dream.”

Heidi Scott considers herself one of the lucky ones. Nearly a decade on, she is still able to live an active, if carefully managed, lifestyle. She has become a patient-advocate, drawing on her experiences with MS — from pursuing a diagnosis to enrolling in clinical trials — to make it easier for other people to do the same, whatever health issue they might be dealing with.

“As an MS patient, you’re almost uniquely positioned to see the gaps in the system. It’s such a complicated disease and it requires an extremely thoughtful, holistic approach to research, treatment, and care,” she says.

“That’s what is so exciting about this donation and UBC’s work.”

This story was originally posted by UBC Faculty of Medicine