During this year’s spring graduation, UBC awarded ten honorary degrees for deserving individuals in various fields. Nobel Prize winner, Dr. Peter Agre, was one of the ten individuals to receive UBC’s prestigious honorary degree. Since the first degrees were awarded in 1925, recipients have included Louise Arbour, Emily Carr, His Holiness The Dalai Lama, Julie Payette, Bill Reid, David Suzuki, and many others.

Dr. Agre is a physician and molecular biologist at Johns Hopkins University, a Bloomberg Distinguished Professor, and the Director of Johns Hopkins Malaria Research Institute. In 2003, he won the Nobel Prize in Chemistry, with Roderick MacKinnon, for the discovery of aquaporins, water-channel proteins that move water molecules through cell membranes. He was also a founding member of Scientists and Engineers for Change, and was one of the 72 Nobel laureates to appeal for climate protection as signatories of the Mainau Declaration 2015 on Climate Change. Agre has also demonstrated a deep commitment to improving relations with the most isolated and insular nations of the world through scientific diplomacy. While serving as President and Chair of the Board of Advisers of the American Association for the Advancement of Science, he led a series of science diplomacy visits to Cuba, North Korea, Myanmar, and Iran, with the hopes of fostering exchanges and collaborations on peaceful scientific projects. 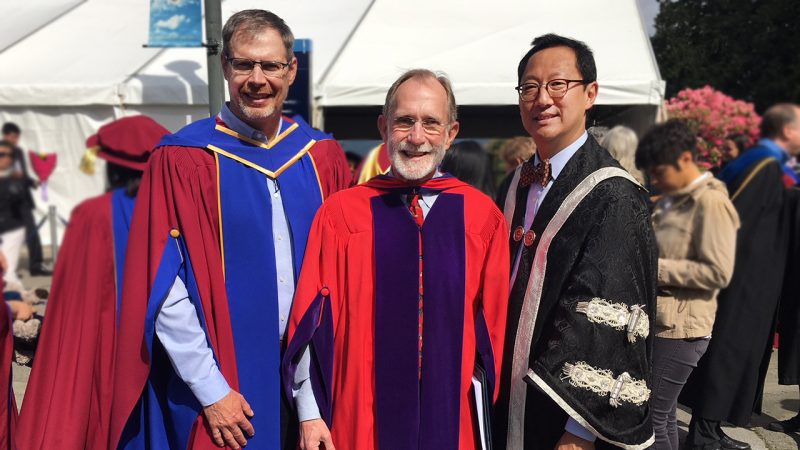 After the graduation ceremonies concluded, Dr. Agre was invited to the Michael Smith Laboratories to meet students and faculty members. He met with research associates and graduate students from Drs. Phil Hieter, Brett Finlay, and Peter Zandstra’s labs to learn about their active research programs. It was a great pleasure to have Dr. Agre visit the Michael Smith Laboratories. Thank you to Dr. Agre for visiting the MSL and congratulations on receiving UBC’s 2018 honorary degree.