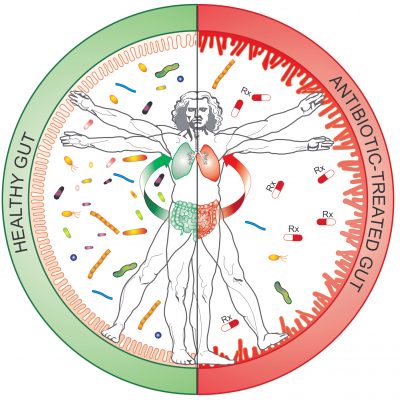 Allergic asthma affects over 100 million people worldwide. It is becoming increasingly prevalent among individuals living in industrialized countries, and affects more than 20% of Canadians. The underlying causes of asthma remain unidentified, however there is increasing evidence to suggest that bacteria that live in the gut (known collectively as the “intestinal microbiota”) play an important role in the development of atopic diseases. These observations support the “hygiene hypothesis”, which proposes that reduced microbial exposure during infancy (for example by exposure to antibiotics) contributes to an increase in allergic diseases like asthma later in life.

The Finlay lab has been interested in studying the role of intestinal bacteria in mouse models of experimental asthma. Recently, Brett Finlay, his graduate student Shannon Russell and his research colleagues in the Biomedical Research Center at UBC have published two studies conducted in mice demonstrating that some antibiotics, when taken in early life, can alter the development and severity of allergic asthma. Mice exposed to clinically relevant doses of these antibiotics during infancy had drastically altered communities of intestinal microbes, and these changes coincided with defects in immune development. Interestingly, when the same antibiotics were administered to mice in adulthood, no differences in asthma severity were detected, suggesting that if a healthy consortium of intestinal microbes is not present in a critical period early in life, proper development of the immune system may be hindered, increasing the risk of allergic diseases like asthma later in life. Links to these research articles and press can be found here:

Brett Finlay is also collaborating with researchers coordinating a nationwide birth cohort study called the Canadian Healthy Infant Longitudinal Development study, or CHILD (http://www.canadianchildstudy.ca/), to provide clinical relevance to this work. The Finlay lab is currently trying to identify how gut microbes differ between healthy infants and those that go on to develop atopy and asthma, and characterize how specific bacteria may be involved in promoting or preventing these diseases.

Research by Dr. Finlay and colleagues aims to establish entirely new roles for intestinal microbes and may ultimately aid in the development of novel therapeutics (e.g. probiotics, prebiotics, etc.) to treat or prevent allergic diseases like asthma in the future.