Cells and tissues are decorated by sugars that enable many physiological and pathophysiological processes. The ability to analyze, characterize, and manipulate these sugar structures is vital in basic and applied research, as well as in medicine. Using a metagenomic screening approach, researchers from the laboratory of Prof. Steve Withers, in collaboration with the laboratory of Prof. Steven Hallam, identified new enzymes (N-acetylgalactosaminidases) with the ability to cleave terminal single sugar building blocks, called N‑acetylgalactosamines (GalNAc) off larger sugar structures or directly from proteins. Enzymes with this activity may have use in the analysis of glycoproteins including protein therapeutics, as well as in biotechnological processes. The study was recently published in the Journal of Biological Chemistry.

The intestinal microbiota – a good source of carbohydrate active enzymes 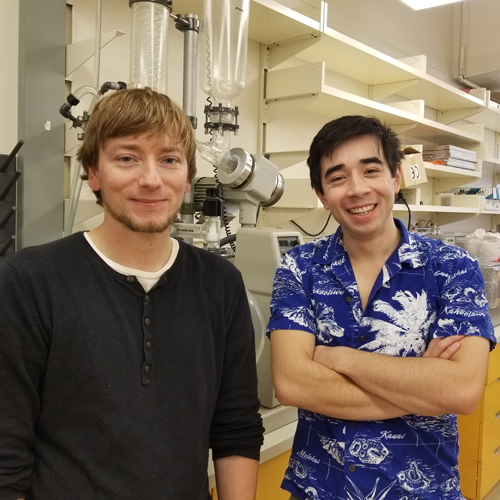 One obvious question when looking for new enzymatic activities is: Where are they likely to be found? To address this, the lead authors, postdoctoral researcher Dr. Peter Rahfeld and graduate student Jacob Wardman, decided to go with their gut – more specifically, they looked at the microbes that live in the intestinal tract of humans, the so-called intestinal microbiome. The gut is a good source for carbohydrate-active enzymes because the complex sugars attached to proteins called mucins that are found in large amounts on the internal surface of the intestines serve as a nutrient source for these microorganisms.

“Those microbes have learned to digest these structures,” explains Dr. Rahfeld. “This means they must have the necessary tools or enzymes, to cleave the sugars. Unfortunately, direct culturing of the right bacteria is very challenging, and you might lose up to 90% of the diversity.”

To avoid this problem, an approach called ‘functional metagenomics’ was used. The researchers isolated the microbial DNA en masse without culturing the bacteria, cut it into small pieces, and then expressed the genes from those DNA pieces in the workhorse bacterium, Escherichia coli.

“We are taking more of an unbiased approach,” adds Wardman. The success of this approach was demonstrated since the researchers were able to identify several candidate enzymes called glycoside hydrolases which are capable of cleaving the target sugar residues.

Glycoside hydrolases are classified into families based on sequence similarity. One enzyme that showed up in the screen belonged to a family that was already known to contain GalNAc cleaving enzymes (family GH109). The enzyme can cleave the type A carbohydrate antigen of the ABO blood group system and had been discovered earlier by the same research group using a similar screening approach

In contrast, the classification of two other enzymes that were identified was unexpected.

“The surprise in the end was that these enzymes are from glycoside hydrolase family 31, which wasn’t known to have this activity,” says Dr. Rahfeld. Specifically, these enzymes are able to cleave GalNAc off proteins, which may be useful for glycoprotein analysis. Having identified the first enzymes with this activity in this family it should now be possible to identify similar ones through bioinformatics. And, who knows, there might be more surprises in this family tree.

The search for new enzymes: A never-ending endeavor

The power of the metagenomic screening approach is highlighted by the identification of three useful enzymes from a screen that used simple replacements for complex biological structures. Next, the authors will use a more targeted approach for specific larger sugars and “ramp up the scale”. They are confident that nature has already invented more enzymes tailored to specific tasks that are waiting to be found.