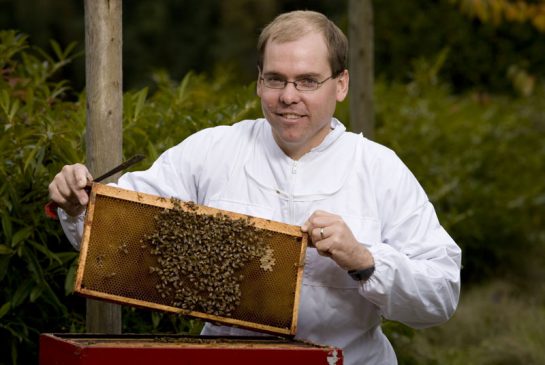 Leonard Foster, a professor at UBC’s Michael Smith Laboratories, is co-leading the BeeOMICS project that will develop protein biomarkers to selectively breed honeybees for twelve economically valuable traits. Beekeepers across Canada will benefit by gaining useful tools to select improved bee colonies that are pest-free, disease-resistant and produce more honey.

Around the world there has been an alarming decrease of the honeybee population which directly impacts humans on many levels. Even the great modern scientist, Albert Einstein, once prophetically said “mankind will not survive the honeybees’ disappearance for more than five years.” In Canada, honeybees produce 75 million pounds of honey and are crucial for pollinating crops. Their total economic contribution is estimated at $4.6 billion per annum.

Leonard, along with colleague Amro Zayed out of Toronto’s York University, will study the insect’s genetics to select for productive bees that are more winter-hardy. Their goal is to reduce the annual Canadian over-wintering loss from 30 per cent to 10 per cent. The bees are not genetically modified but are selectively chosen using molecular tools in order to breed more effectively.

The project was awarded $7.3 million through Genome British Columbia and Genome Canada funds.