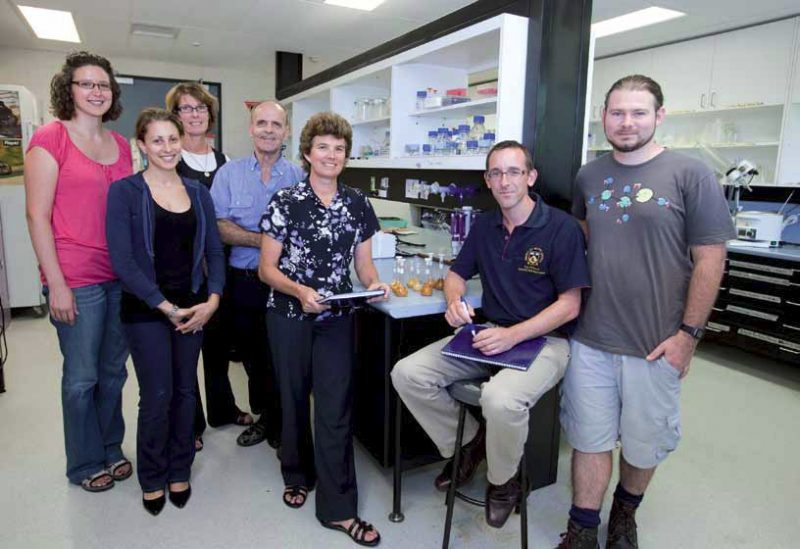 SspiSsy, SauSsy and SaSsy are about to take on the spicy world of perfume oil following the discovery at UWA of the genes for synthesis of sandalwood oil.

Professor Julie Plummer in the School of Plant Biology has been working with sandalwood for seven years and she and her team, in collaboration with Professor Joerg Bohlmann from the University of British Columbia and Dr Liz Barbour from the Forest Products Commission, have finally isolated the genes for sandalwood oil which is so prized for its use in perfume manufacture.

“There is still a lot of work to do to develop the perfume oil, but we are very excited,” Professor Plummer said.

“It has taken us years to isolate the genes but now we are able to synthesise the major components of the oil. We have the genes for that process in three different sandalwood species, Santalum album (SaSsy), Santalum austrocaledonicum (SauSsy) and Santalum spicatum (SspiSsy). The Santalum album species is the dominant sandalwood grown in the Ord River region, Santalum spicatum is an Australian species grown in the wheatbelt and the goldfields, and Santalum austrocaledonicum, as the name suggests, is from New Caledonia.

“Our rather cheeky names for the genes use standard coding for enzymes – with a little bit of licence! It makes them easier to pronounce and more memorable,” she said.

Her team extracted RNA from sandalwood tree trunk cores where they expected to find oil being synthesised. “RNA carries the information of the DNA sequences of genes that the cell requires, including enzymes for oil synthesis.

“We used sequences of DNA for other genes that code for similar types of enzymes to the ones we were looking for.

“We made some good guesses, then checked these were the right genes by inserting them into a bacteria.”

Associate Professor Emilio Ghisalberti has been working with the sandalwood group, on the critical chemistry component of the project. He and Professor Plummer are co-supervising a PhD student in chemistry and plant biology, Jessie Moniodis, who is working on ’Spicey’ (SspiSsy). Postdoc Katherine Zulak, from Professor Bohlmann’s laboratory, is concentrating on ‘Saucey’ (SauSsy). The final ‘spice girl’ is a male: research associate, Dr Chris Jones, who is focusing on ‘Sassy’ (SaSsy).

“It is very exciting for us: no one else has found these genes. As sandalwood is an important industry in WA, we have protected the genes so we can control how they are used. Dr Liz Barbour from the Forest Products Commission and Simon Handford in the Office of Industry and Innovation (OII) at UWA have helped us to lodge a patent for the process. They have done a great job. It’s very complex, sorting intellectual property across continents.”

Dr Barbour has recently joined UWA, as a research development officer with the Faculty of Natural and Agricultural Sciences.

“The research is funded by the Forest Products Commission and the ARC and we are grateful for their ongoing support of our work and this growing industry,” Professor Plummer said.

The group has a liaison with Professor Bohlmann at the University of British Columbia, who has worked extensively with terpenes (the oils from wood), primarily using conifers. Terpenes have a major role in pest and disease resistance, which is the focus of his research.

“We used Joerg’s knowledge of terpene DNA to help us,” Professor Plummer said. “We compared DNA from Canadian trees with the DNA from our plants. When we found a match with the terpene synthesis genes, it was quite likely that our gene could be used for oil synthesis.”

She said her group was now working on upregulating the genes by application of elicitors (natural chemical compounds) to stimulate the synthesis of more oil. “The amount of oilbearing heartwood in trees is very variable and it would greatly assist the industry if we could increase it.”