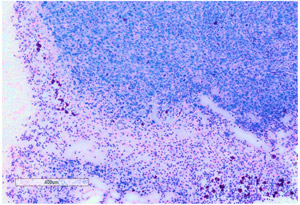 UBC researchers have discovered how cancer cells become invisible to the body’s immune system, a crucial step that allows tumours to metastasize and spread throughout the body.

“The immune system is efficient at identifying and halting the emergence and spread of primary tumours but when metastatic tumours appear, the immune system is no longer able to recognize the cancer cells and stop them,” said Wilfred Jefferies, senior author of the study working in the Michael Smith Laboratories and a professor of Medical Genetics and Microbiology and Immunology at UBC.

Cancer cells genetically change and evolve over time. Researchers discovered that as they evolve, they may lose the ability to create a protein known as interleukein-33, or IL-33. When IL-33 disappears in the tumour, the body’s immune system has no way of recognizing the cancer cells and they can begin to spread, or metastasize.

The researchers found that the loss of IL-33 occurs in epithelial carcinomas, meaning cancers that begin in tissues that line the surfaces of organs. These cancers include prostate, kidney breast, lung, uterine, cervical, pancreatic, skin and many others……