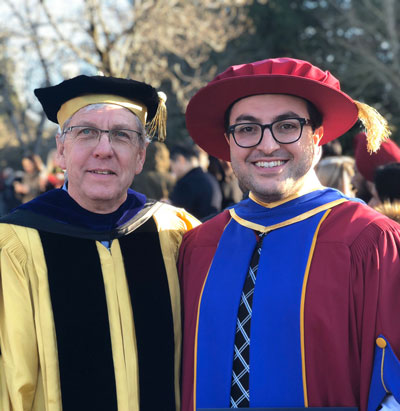 Everything around us is connected in some way. Science has taught us that species are genetically more similar than they are different and what we know about one species will likely teach us about others. In research, small and simple organisms are studied as models in hopes of furthering the understanding of the biological processes that underlie human biology and disease. One model organism that can be used for this type of research is yeast. A yeast cell has genes that have similar roles in human cells. However, compared to human cells, yeast cells are more easily manipulated, even at the level of the DNA.

In a new paper published in GENETICS, UBC researchers were able to express a human cancer drug target protein in yeast cells, by swapping in the human gene to replace the corresponding yeast gene, establishing a ‘humanized yeast’ platform that can be used to test candidate anti-cancer drugs.

“A drug that works in a test tube may not work on the intended target when introduced into human cells,” says Akil Hamza, first author of the study and graduate student in Dr. Philip Hieter’s laboratory. “We now have a simple, cell-based system to test potential drugs for on and off-target effects in a living organism.”

In this study, Hamza and co-authors demonstrate the utility of this approach by testing two compounds reported to inhibit the anti-cancer target Fen1. Fen1 is a protein that functions in DNA replication and repair. Studies have shown that Fen1 is highly expressed in several cancer types and supports the hyper-proliferation of cancer cells. Using ‘humanized yeast’, the researchers showed that one of the tested compounds was capable of inhibiting Fen1 in a living organism, while the other drug showed significant off-target effects. Off-target effects are a potential problem in drug development as it can potentially lead to clinical trial failures. The yeast cell-based assays generated in this study can help prioritize drug candidates based on potency and specificity for further testing in pre-clinical models. This study establishes a simplified cell-based platform that can study human genes that have relevance to cancer development and therapeutics.

“Now that we have established yeast-based platforms to test inhibitors of human proteins, we are expanding the analysis to test more candidate cancer targets,” explains Hamza. “We are also working with academic and commercial collaborators to test additional inhibitors of Fen1 that may have clinical significance.”

This research is supported by grants from the Canadian Institutes of Health Research and doctoral awards from the University of British Columbia.

Dr. Hieter and CSMB: ensuring a strong future for science and scientists

Philip Hieter elected to the American Academy of Arts and Sciences