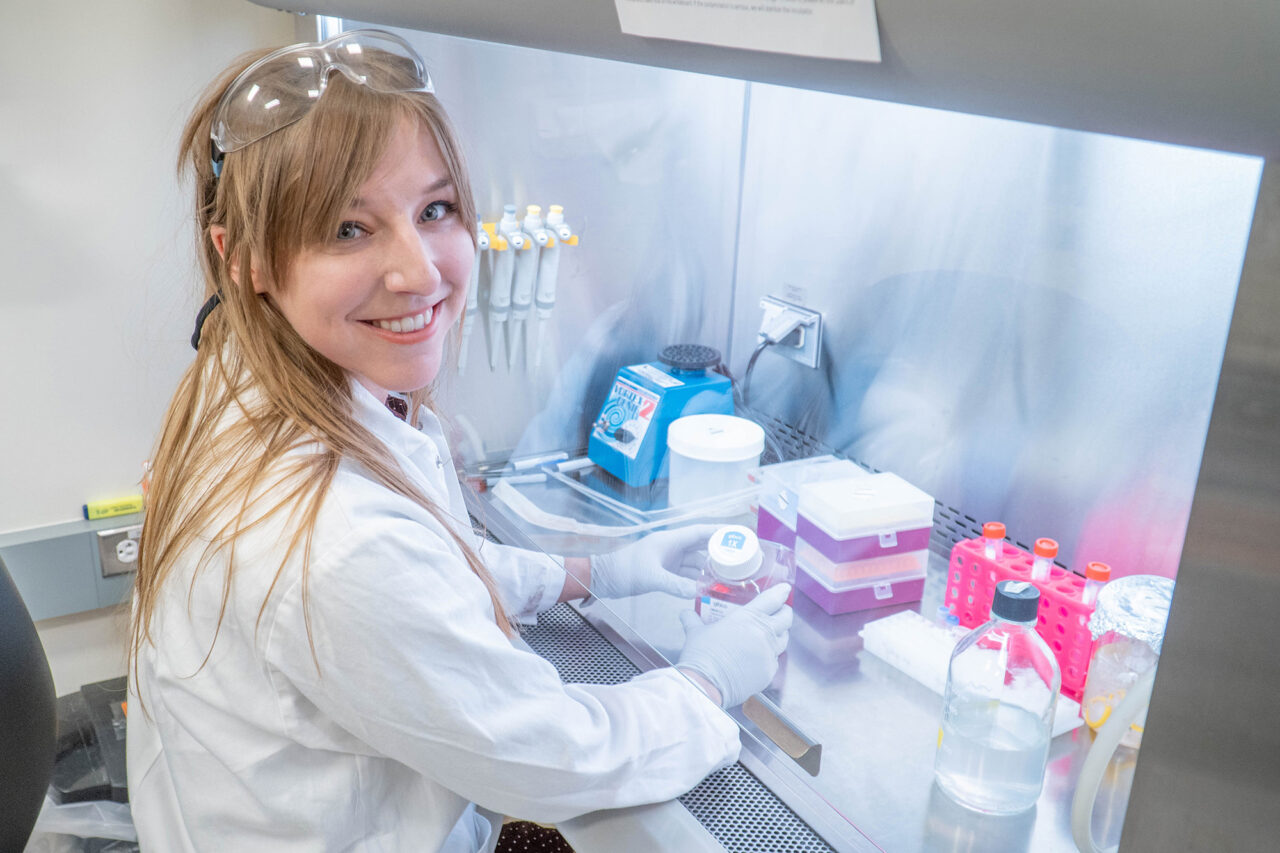 After beginning undergrad at the Art Institute of Chicago, Cristen Molzahn didn’t expected her path would lead to a career in biochemistry and molecular biology. The recipient of this year’s William and Dorothy Gilbert Scholarship, Molzahn thinks fondly of the science class that became a turning point in her life. Seeking a new direction after art school, Molzahn enrolled in a chemistry class with a focus on neurodegenerative diseases. Cristen was amazed to learn how misfolded proteins were responsible for these diseases and became fascinated with the field. She was inspired to study biochemistry at the University of Wisconsin and graduated with a Bachelor of Science. Wanting to continue her studies, she began researching and came across some scientific papers published from Dr. Thibault Mayor’s lab at the University of British Columbia. Now in her fifth year of her PhD studies in the Mayor lab, Cristen is honoured to receive this award which has impacted her in several ways.

“Fellowships like this have a big impact on graduate students generally. A lot of grad students struggle financially and having some of that stress reduced makes it easier to focus and think creatively. For me personally, I haven’t taken the most straightforward path in science and sometimes I feel uncertain I belong. It’s validating to receive an award like this. It feels like other people think I belong.” 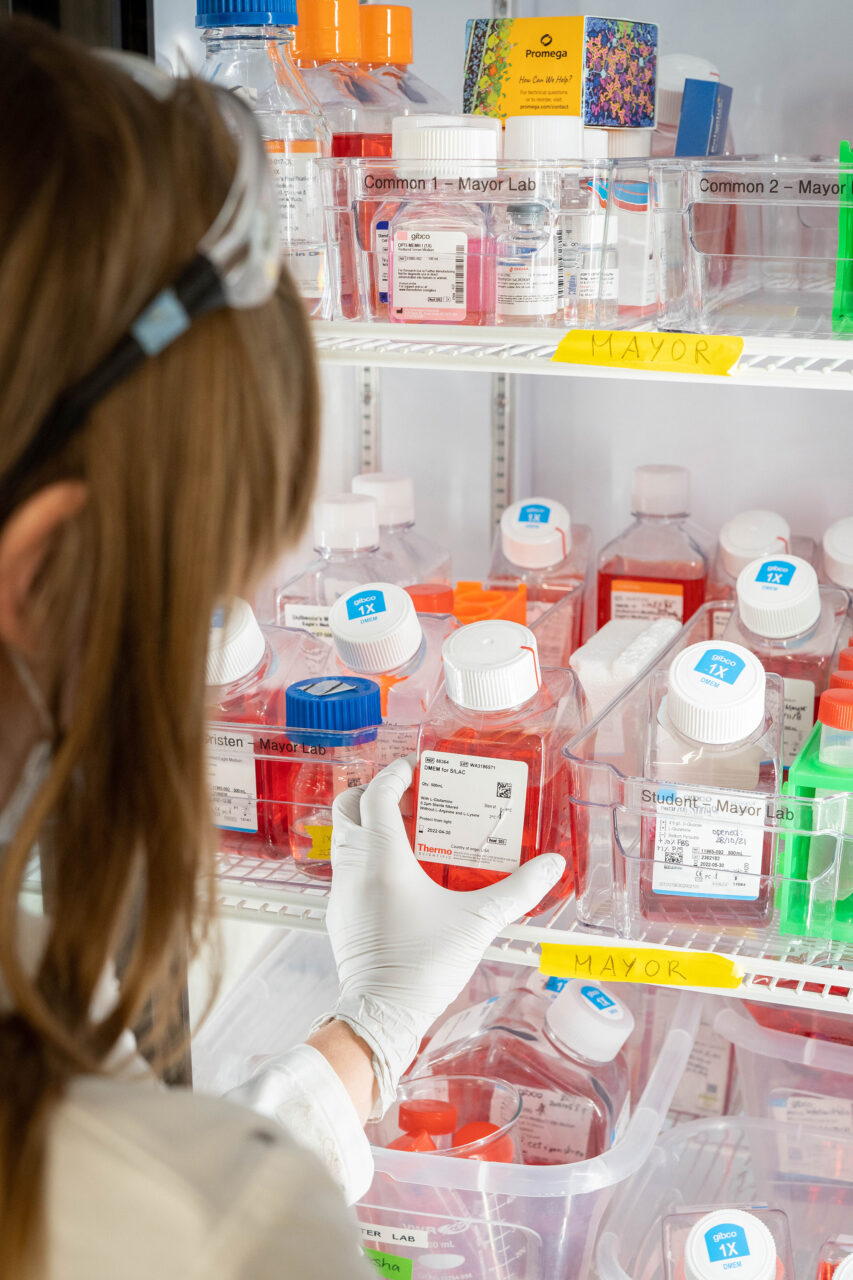 Now five years into her studies with the Mayor Lab, Cristen is working on projects related to neurodegeneration. Currently the lab is looking at proteins that aggregate with age (a phenomenon where mis-folded proteins combine to from anomalies), which are often associated with neurodegenerative diseases. Working with samples from older mice, researchers collect brain tissue and isolate the aggregated proteins using a centrifuge. Using mass spectrometry (a method that measures the mass-to-charge ratio of ions) to analyze the content of the proteins, they are discovering how protein homeostasis declines with age and how this can lead to illness.

What is your favourite thing about the field of biochemistry?

Previously working mostly in the wet lab conducting experiments, Cristen began doing more computation work, an often overlooked area of scientific research. She began analyzing the results of experiments and noticing patterns in the data. She found the culmination of all the wet lab research, drawing conclusions and making discoveries as a result of that work, very rewarding.

“One day I was doing some data analysis, looking at all these studies and protein features, and I could see how these features change with age. From the data alone I was able to recognize the difference between the types of proteins that aggregate between younger and older disease models. That moment felt like I was really seeing something significant for the first time. I was surprised to realize that data analysis is an aspect of this research I am passionate about. The data analysis is the really exciting part. It was exciting to discover something about myself through grad school.” 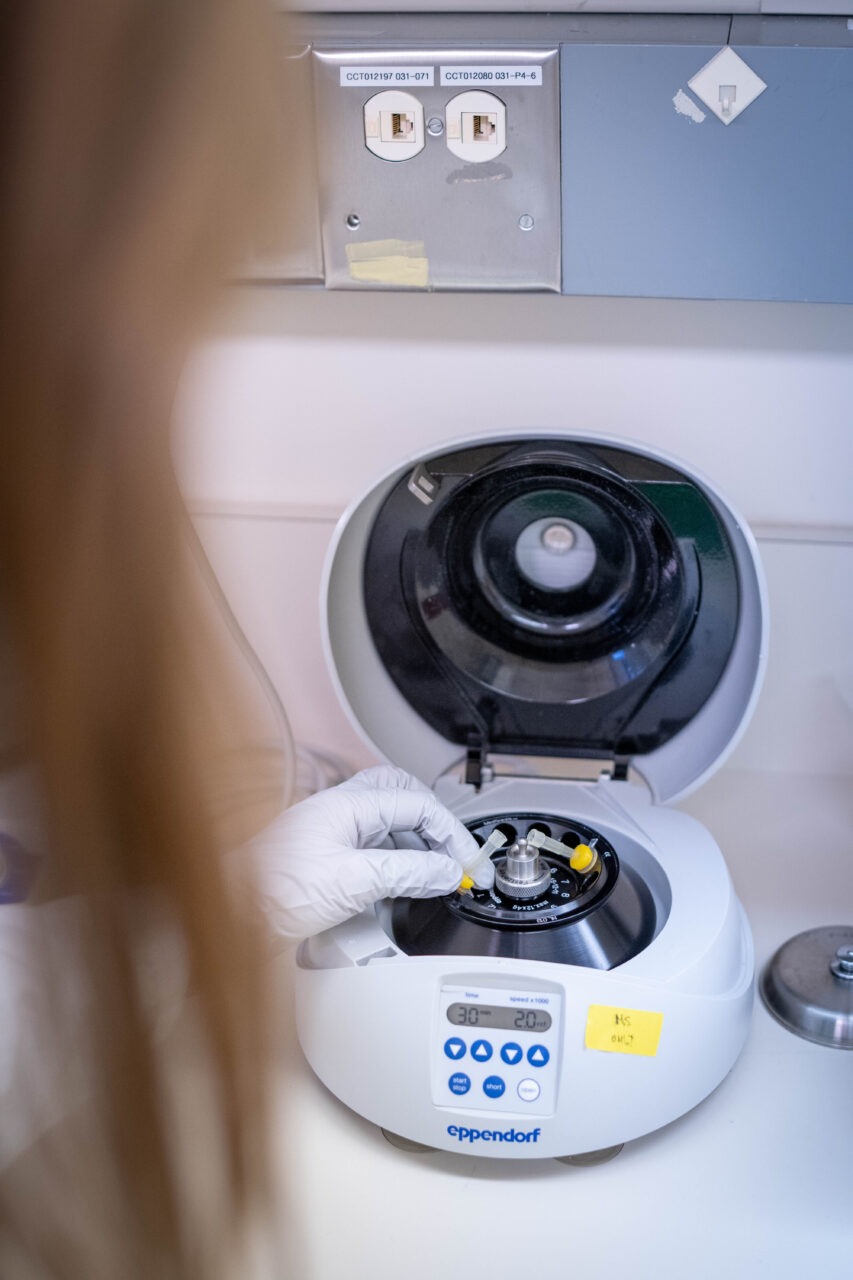 What is it like to do research here at the Michael Smith Laboratories?

“The culture of curiosity at the Mayor lab is inspiring. There are a large variety of projects going on and everyone has the ability to pursue their own interests. This field attracts people who are really self-motivated and thoroughly interested in their work,” explains Molzahn.

The Michael Smith Laboratories (MSL) functions as a biotechnology research hub, housing scientists from across five different Faculties. The Mayor lab draws researchers from Biochemistry and Microbiology and the Genome Sciences and Technology program together. The lab is working on several streams of projects simultaneously including: cytosolic protein quality control, stress granule composition and the aging project which Cristen is a part of.  Recently Cristen collaborated with a postdoctoral student co-supervised by Dr. Jörg Gsponer at his bioinformatics lab, also at the MSL. Together they worked on a protein feature analysis project which granted Cristen the opportunity to learn more about computational work.

“It’s great to see how collaboration between disciplines is highly encouraged here at the MSL with projects like the Kickstart grant. You’re able to get help with your research across different departments this way. It’s a unique opportunity.” 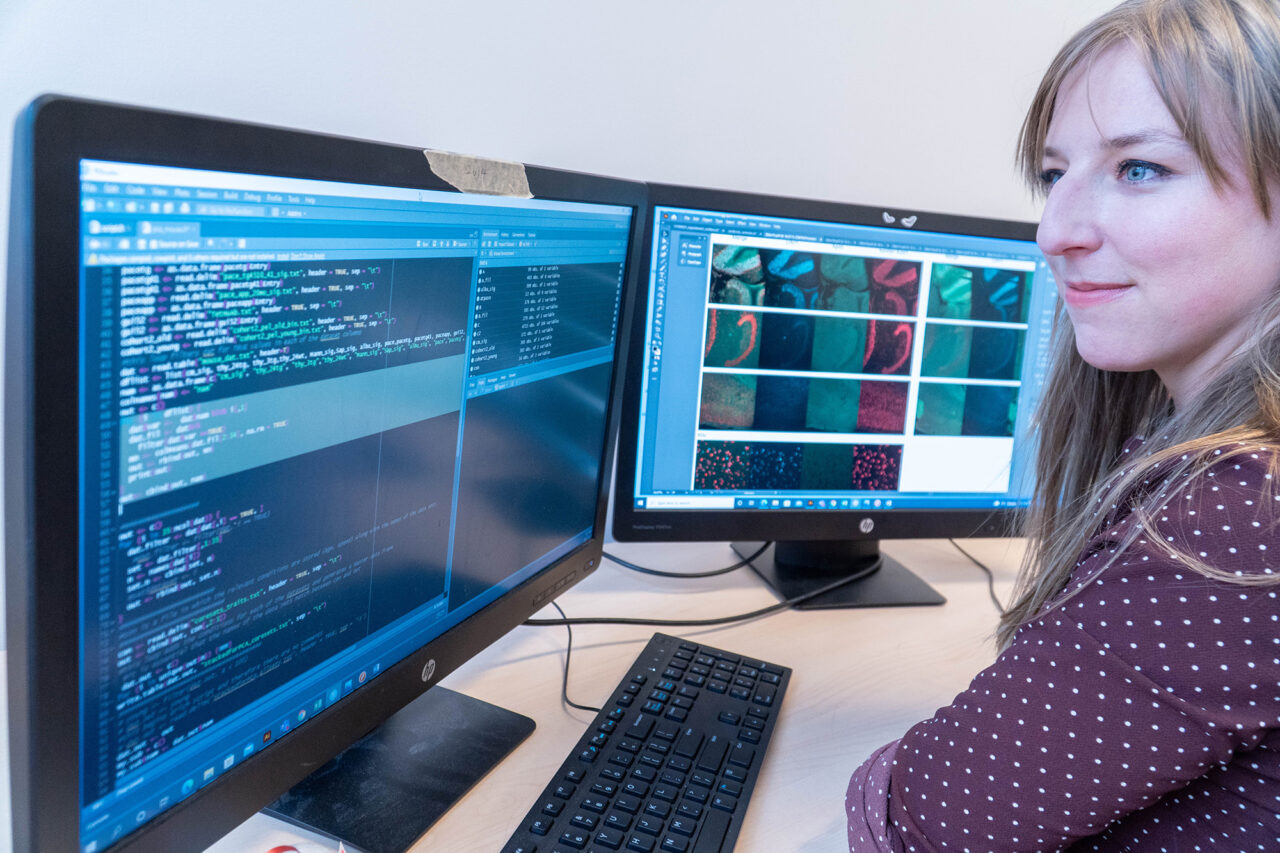 How has the pandemic impacted your research?

“The pandemic gave me the opportunity to really explore my computational interest. I was able to start a meta-analysis of a lot of data sets using the same method in different disease models. During the pandemic I didn’t have access to disease models in the lab to do my own studies but there were many published and available to work with. I couldn’t have pursued that meta-study without the time to explore all the data sets that were out there and make the switch to computational work. I was lucky to have that available to me.” 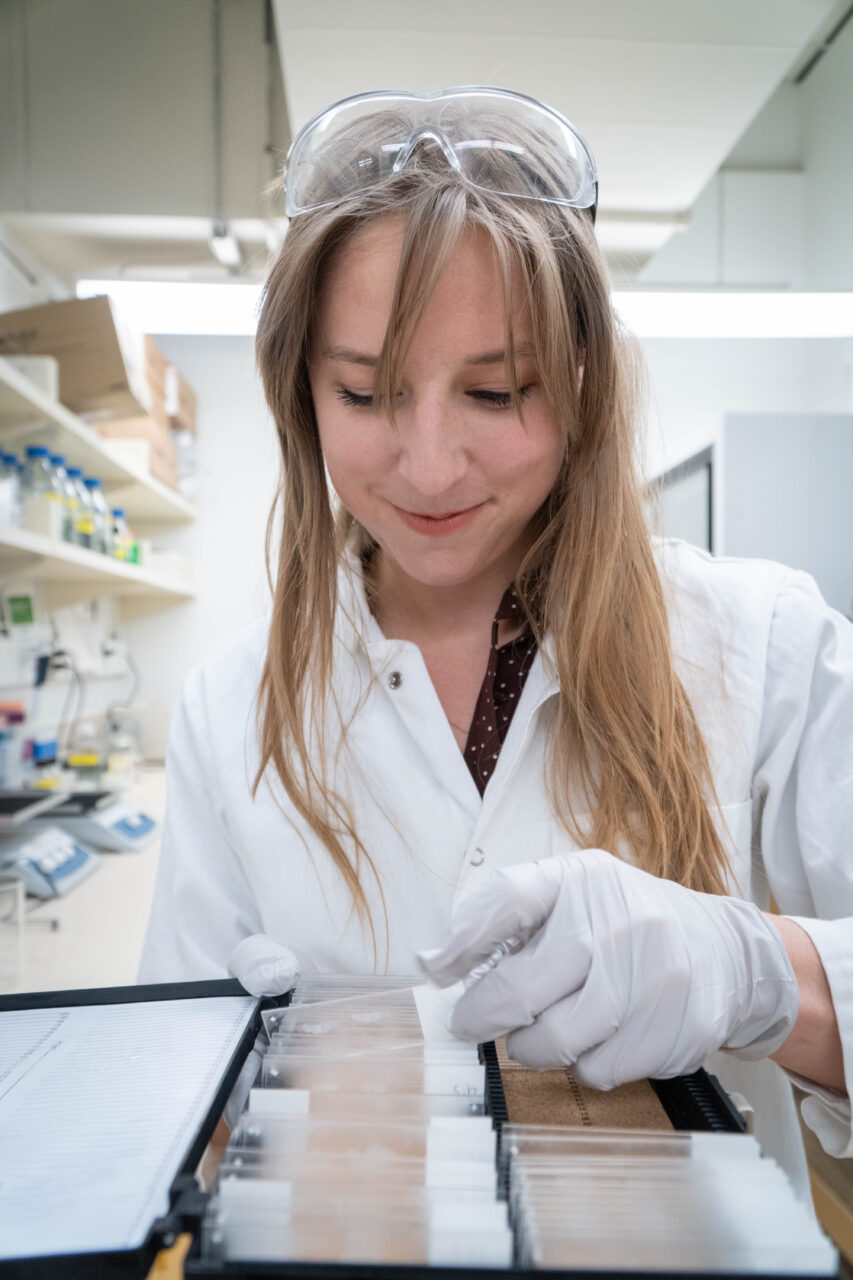 What are you most looking forward to in post-pandemic life at the lab?

“Back in the wet lab it’s been really exciting to validate the results of the stuff I’ve been doing computationally. My focus right now is tissue staining and using microscopy to confirm what data analysis shows. This type of work was put on hold during the pandemic as we had to step back from the lab. Initially, I wanted to validate my own findings, but now I’m able to validate the larger findings of this meta-study. The scope of my research has changed having this additional analysis time.”

With a new found love of bioinformatics, Cristen hopes to continue on with in the aging field and pursue further research in neurodegeneration. Hoping to conclude her PhD studies within the next two years she aims to shift her work into postdoctoral studies in the computational field. The aging field is amassing substantial data sets that present a ripe opportunity for further analysis and discoveries.

How do you spend your time outside the lab? 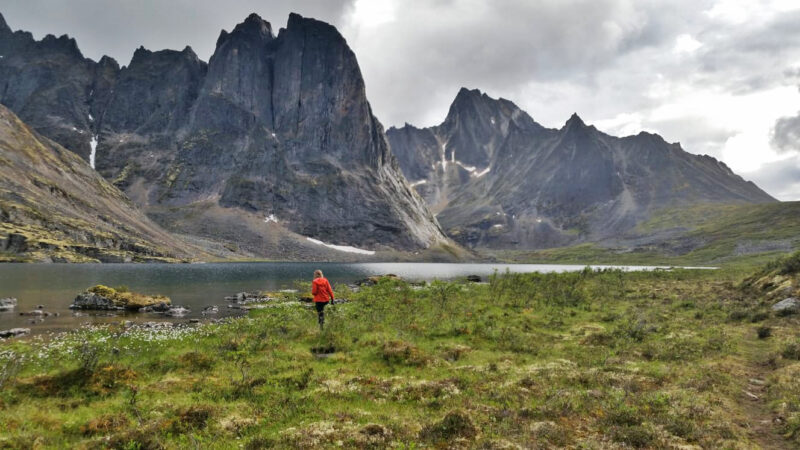 When not scrutinizing data sets and staining tissue samples, Cristen enjoys getting outdoors spending her time hiking and climbing most weekends. To give her analytic brain some active recovery time she also practices the cello, taking regular lessons.

“There is a general interest in similar activities outside our lab. Many people enjoy the arts, music, architecture and design. There are lots of creative problem solvers here.”

Having taken an unconventional path to the scientific research she now does, Cristen is keen to share her story in the hopes that others considering this field may be motivated to explore the sciences. Her continued curiosity and academic exploration has served her well. We look forward to seeing Cristen’s work evolve over the next two years.