In celebration of the 25th anniversary of Dr. Michael Smith winning his Nobel Prize in Chemistry, the Michael Smith Laboratories held a scientific symposium and the Advanced Molecular Biology Laboratory (AMBL) hosted a special full-day science education conference for high school students in the Lower Mainland. Dr. Dave Ng, Director of AMBL, spearheaded the outreach day rounding up to 180 participants from various high schools. The event was made possible by sponsors from the 25th Anniversary Celebration of Michael Smith’s Nobel Prize, with special mention to Genome BC, UBC Microbiology and Immunology, the Gairdner Foundation, and STEMCELL Technologies. 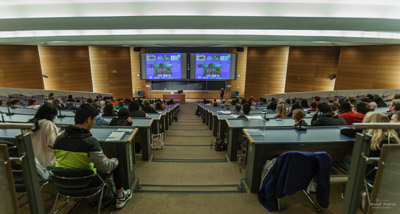 The event started off at the Life Sciences Centre where Dr. Dave Ng welcomed the crowd and introduced the agenda for the day, including talks from some of the most prominent scientists in Canada. Then, Dr. Phil Hieter gave an interactive talk to the students about science research and model organisms. Dr. Phil Hieter is recognized for his work on structural and regulatory proteins that ensure faithful segregation of chromosomes during cell division. He is a Fellow of the American Academy of Arts and Sciences, the American Association for the Advancement of Science, the Royal Society of Canada, and the American Academy of Microbiology. He was also a past President of the Genetics Society of America. After Dr. Hieter’s talk, Dr. Molly Shoichet spoke to her area of research and delivered messages of  STEM education and its importance. Dr. Molly Shoichet is a Tier 1 Canada Research Chair in Tissue Engineering and Professor of Chemical Engineering at the University of Toronto. She is an expert in the study of polymers for drug delivery and tissue regeneration in the central nervous system and cancer. She is the only person to be a fellow of Canada’s three National Academies, is a foreign member of the US NAE, Killam Prize winner, and L’Oréal-UNESCO For Women in Science laureate. The students were fully engaged and ready to tackle the science activities planned for the day. 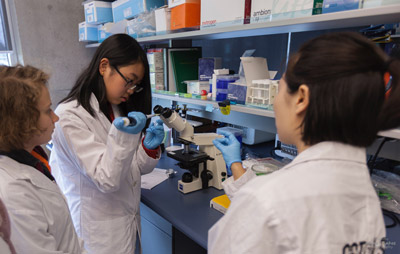 The event then kicked off with two streams of hands-on molecular biology-themed activities at the Michael Smith Laboratories and at the Life Sciences Centre. Stream one at the Michael Smith Laboratories included genomic DNA isolation (hosted by Genome BC), a microbial biodiversity lab, and lab tours conducted by graduate students. Stream two at the Life Sciences Centre included a cell culture lab, an imaging lab, and discussions with graduate students.

The day was then wrapped up at the Michael Smith Laboratories were the students filled the lecture theater to hear about career paths in biotechnology from a STEMCELL representative, who was also a graduate of the Michael Smith Laboratories. Dr. Dave Ng concluded the event with science-themed prizes such as books, Phylo card games, board games, and more. Overall, the event was a success and the students went home filled with new knowledge to share!