Hosted by the Michael Smith Laboratories at UBC, this symposium celebrated the legacy of Dr. Michael Smith and his ground-breaking research on site-directed mutagenesis, a discovery earning him a Nobel Prize in Chemistry in 1993. Dr. Smith was B.C.’s first Nobel Prize winner, bringing national and international attention to B.C.’s biotechnology landscape. 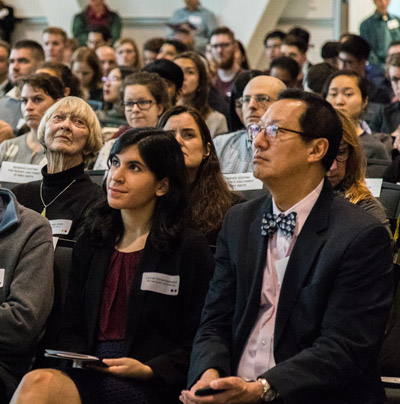 Dr. Peter Zandstra, Director of the Michael Smith Laboratories, and Dr. Santa Ono, President of UBC, opened the event with welcoming remarks, speaking not just of Dr. Smith’s research achievements, but also his contributions to B.C.’s scientific community. Playing an integral part in establishing UBC’s Biotechnology Laboratory, an interdisciplinary research group which was later renamed the Michael Smith Laboratories in his honour, Dr. Smith was committed to promoting research excellence within young scientists. Despite his many achievements, Dr. Smith is remembered as a humble humanitarian who used his status to further science research and to educate the public about the importance of basic science. Following the welcoming remarks, Drs. Julian Davies, Doug Kilburn, and Julia Levy took part in a ‘Friends of Michael Smith Panel,’ sharing entertaining stories about Dr. Smith. Quite memorable was Dr. Levy’s story of Dr. Smith carrying his Nobel Prize in a plastic grocery bag, and then temporarily misplacing it amongst his luggage on his way back from receiving the Prize in Stockholm, Sweden. The Nobel Prize medal was almost lost! Luckily, it was found amongst the luggage and made its way safely to Vancouver, B.C.

The first scientific talk of the day was led by Dr. Marco Marra, Director of the Michael Smith Genome Sciences Centre (GSC). One of several research institutes within B.C. that was founded by Dr. Smith, the GSC emphasized Dr. Smith’s ability to mobilize both provincial and federal politicians to drive scientific research forward. The GSC was one of the first institutions to use next-generation sequencing techniques, which allowed them to create a patient-orientated pipeline that aims to provide individual treatment plans for cancer patients, based on their genetic data.

After Dr. Marra’s presentation, the 2018 Michael Smith Lecturer, Dr. Feng Zhang, approached the podium to speak. Dr. Feng Zhang of MIT provided insight to how far genetic engineering has progressed since Dr. Smith first developed the technology to change single base pairs in DNA. Dr. Zhang discussed advances in the newest gene-editing tool, CRISPR-Cas systems, which facilitates insertion or deletion of entire genes. These tools can be adapted for use in a simple viral detection system, capable of detecting multiple viruses within the same biological sample, or be used to directly edit RNA without first modifying its DNA blueprint.

The next invited speaker was Dr. Janet Rossant of SickKids and the University of Toronto. Dr. Rossant discussed her work on mouse embryo and embryonic stem cell development. Using gene editing she is able to identify the signalling pathways which restrict the formation of different cell types, and visualize how adding or removing certain genes effects embryo development, all in a petri dish! She ended her talk with a reminder of the ethical issue surrounding genetic editing. While the technology is not advanced enough for widespread use in humans, there remains the question of ‘How far to too far?’ when it comes to genetic alterations.

The final invited speaker of the day, Dr. Molly Shoichet of the University of Toronto, described how engineering the extracellular environment can be used to study cell behaviour. Her lab has developed hyaluronic acid-based hydrogels that can be modified by cells grown within them, accurately modeling their behaviour in the body. Using this technology in drug screening assays may lead to the development of new therapeutics for lymphangioleionyomatosis, a disease leading to lung destruction. As a thank you for their time, all three of the invited speakers received a traditional Talking Stick commissioned by a local Musquem artist. This gift recognizes the Musquem people, whose territory UBC sits on, and is a reminder of Dr. Smith’s appreciation of the First Nations’ art and culture. 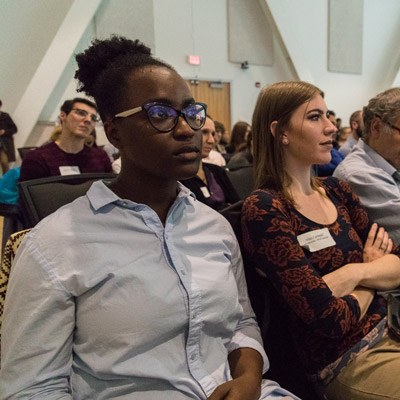 Audience members at the symposium. Photo by Alexander Kim.

In addition to the invited speakers, current and former members of the Michael Smith Laboratories gave short talks which highlighted how well Dr. Smith’s vision of a multidisciplinary research group has flourished. Dr. Brett Finlay of the Michael Smith Laboratories, who was originally recruited to the Biotechnology Laboratory by Dr. Smith, discussed the role of the microbiome in disease. His work has helped identify the negative impact of widespread antibiotic use and its prevalence on immune and inflammatory diseases, wiping out ‘good’ bacteria along with the bad. Dr. Véronique Lecault, a Michael Smith Laboratories alumna and co-founder of AbCellera Biologics Inc., described how single-cell screening assays aid with therapeutic antibody development. This enabled the rapid development of an Ebola vaccine, and the Pandemic Prevention Platform (P3), a joint project with DARPA (Defense Advanced Research Project Agency) that aims to increase how quickly countries can respond to any pathogen outbreak. Dr. Joerg Bohlmann of the Michael Smith Laboratories reminded the audience of the importance of plants and plant chemistry in agriculture and human health, including how genome sequencing helps plant biologists today. Next, Linda Horianopoulos, a PhD student in the Kronstad Lab, described her work uncovering the role of heat-tolerant proteins in human plant pathogens, which allows them to switch from plant to human hosts during infection. Dr. Christian Kastrup of the Michael Smith Laboratories described new therapies for treating severe bleeding, while Dr. Natalie Strynadka of the Department of Biochemistry and Molecular Biology shared how cryogenic electron microscopy had enabled researchers to visualize large protein complexes in bacteria. These complexes allow bacteria to infect host cells and knowing their structure may help in the development of new anti-microbial therapeutics in the future.

Finally, a thank you to all the organizers, volunteers, and sponsors who made this event possible. For more information on the Michael Smith Laboratories, including ongoing research and education and outreach programs, visit www.msl.ubc.ca. 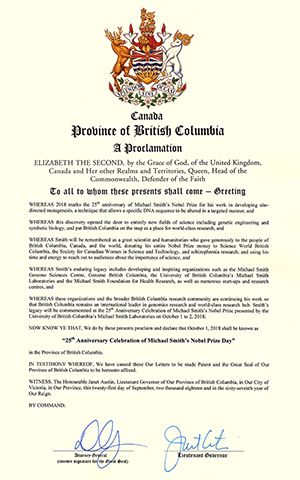 The BC government had proclaimed that Monday October 1, 2018 as the 25th Anniversary Celebration of Michael Smith’s Nobel Prize Day. Nobel Laureate, Dr. Michael Smith (1932-2000), will be remembered as a great humanitarian who was passionate about research and science. He shares the Nobel Prize for his work in developing site-directed mutagenesis, a technique that allows a specific DNA sequence to be altered in a targeted manner. This research opened the door to entirely new fields such as genetic engineering and synthetic biology, and put BC on the map as a place for world-class research. Smith will be remembered as a great scientist and humanitarian who gave generously to the people of BC, Canada, and the world, donating his entire Nobel Prize money to Science World BC, the Society for Canadian Women in Science and Technology, and schizophrenia research. His legacy includes developing and inspiring organizations such as the Michael Smith Genome Sciences Centre, Genome BC, UBC’s Michael Smith Laboratories, and the Michael Smith Foundation for Health Research. These organizations and the broader BC research community are continuing his work so that BC remains an international leader in genomics research and a world-class research hub. Smith’s legacy will be commemorated at the 25th Anniversary Celebration of Michael Smith’s Nobel Prize presented by UBC’s Michael Smith Laboratories on October 1 to 2, 2018.

For images of the symposium, please see the photo gallery below.

We also held a Youth Outreach Day as a part of the celebration!

Learn more about how Day 2 of the 25th Anniversary Celebration of Michael Smith’s Nobel Prize went:

UBC’s student newspaper, The Ubyssey, wrote a great article about the event.

The Vancouver Sun wrote an article showcasing how Michael Smith put BC’s life sciences community on the map with a Nobel Prize, 25 years ago.

A news release was distributed to highlight this celebration.