Dr. Stephen Withers is a professor in the Departments of Chemistry and Biochemistry and the Michael Smith Laboratories at UBC, and a Fellow of the Royal Society, London.

Dr. Stephen Withers has learned a lot about the economics of blood over the past few years.

Blood donations dried up during the COVID-19 pandemic. In June 2022, Canadian Blood Services reported that the nation’s blood supply was critically low. Shortages also struck the U.S., Australia, much of Africa, and many other countries. Meanwhile, the global blood and blood components market is booming — to the tune of $37.18 billion in 2022, according to market reports.

In response, alongside UBC researchers Dr. Jay Kizhakkedathu and Dr. Peter Rahfeld, Dr. Withers has developed a process that could very well make blood types obsolete. To bring it to the world, the three had to found a company to help navigate regulatory requirements and enter the marketplace.

“All hospitals need to have blood,” Dr. Kizhakkedathu says. “There might be some changes in how they process or how they generate the blood, but that industry isn’t going to disappear. It takes time for them to adapt, but our technology has the potential to change the way we process, store and distribute the blood.”

There are four major blood types — A, B, AB and O. What sets them apart is the presence of sugar structures called antigens on the outside surface of red blood cells. Blood types A and B both have the same core sugar structure as blood type O, but differ by having an additional sugar at the tip of the molecule. 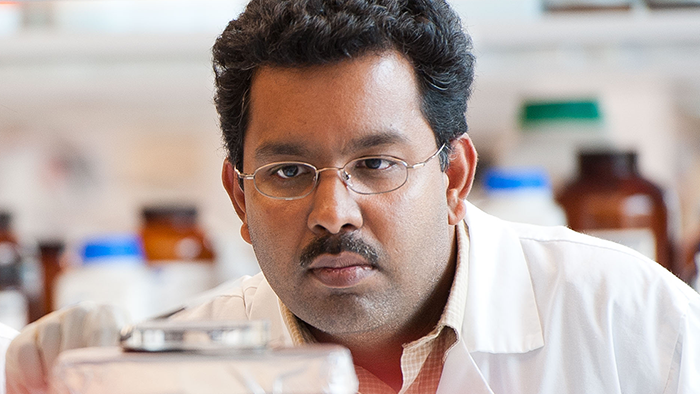 Dr. Jayachandran Kizhakkedathu, a professor in the Department of Pathology and Laboratory Medicine and the Centre for Blood Research at UBC, is an expert in biomedical research involving blood.

Blood transfusions are critically important in many medical procedures, but if a person receives blood of a different type than their own, the antigens can sometimes trigger a fatal immune response. Transfusion patients must receive either their own blood type, or type O, a universal blood without the extra sugar molecules of A and B types.

Dr. Withers and his colleagues have developed a process to make any blood type into type O by using a naturally occurring enzyme that removes specific sugar molecules from blood types A and B.

The antigens that determine our blood type are also present on the internal surface of our circulatory system and on the cells of tissues covering all internal and external surfaces of our bodies.

Critically, that includes the lining of the gut wall. The molecules forming the lining are called mucins and they protect the tissue by acting as a barrier to stop bacteria from invading the body. In fact, there’s a synergistic relationship between the bacteria and the mucin. Since the bacteria attach themselves to the mucins to avoid being swept through the gut some of those bacteria have enzymes that can clip the A and B antigens off the mucin as a source of food.

Among the hundreds of thousands of bacteria in the human gut, the Withers lab went hunting for the enzymes — or combination of enzymes — that were best at clipping antigens from mucin. Harvesting enzymes wasn’t a new idea, but Dr. Withers’ process had the potential to scale.

To find the requisite enzymes, Dr. Withers adopted a methodology called metagenomic screening that he had learned from UBC microbiologist Dr. Steven Hallam. Dr. Rahfeld, a postdoctoral fellow in the Withers lab, collected DNA from gut bacteria extracted from a fecal sample from a volunteer with blood type AB. He cut this mix of DNA into large pieces and glued them into E. coli bacteria, which can be easily grown in a lab. He then looked at 20,000 E. coli clones, each carrying a different piece of genetic information, hoping that some of the E. coli would “read” that genetic information correctly and produce the enzymes and other proteins encoded there. 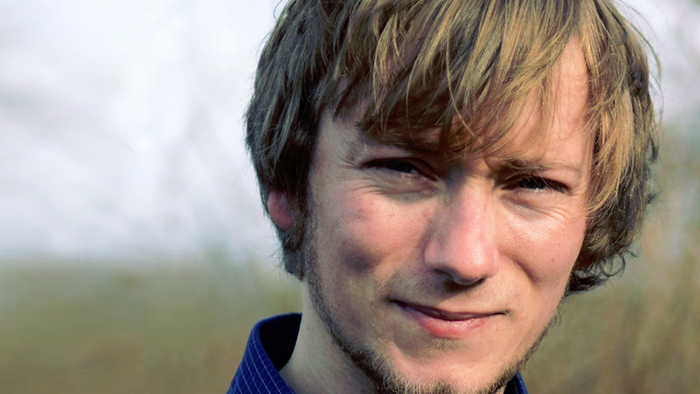 Dr. Peter Rahfeld first identified the enzymes that can remove antigens from A and B blood types.

Dr. Rahfeld found that a single enzyme wasn’t the best at doing this job, but a pair of enzymes working together efficiently snipped the antigens in just the right way.

“It’s a combination that works in an elegant way to convert A antigens to O antigens with a few micrograms of the enzymes,” says Dr. Kizhakkedathu. “It works in plasma, it works in whole blood, in the test tube, in a blood bank, in a bag of blood cells, or a bag of blood. And it works efficiently. In fact, these enzymes are 30 times more effective than the best previously known.”

In the lab, the new enzymes were tested on the blood cells, serum and plasma from almost 400 donors — people of all ages and ethnicities — to ensure the converted blood cells are non-immunogenic and hadn’t changed in some unintended way. The modified blood products were then incubated in a test tube to make sure there weren’t any reactions that damaged the red blood cells, as would happen if the wrong blood type were transfused into a patient.

“We haven’t seen any kind of worrisome adverse reaction yet,” Dr. Kizhakkedathu says. 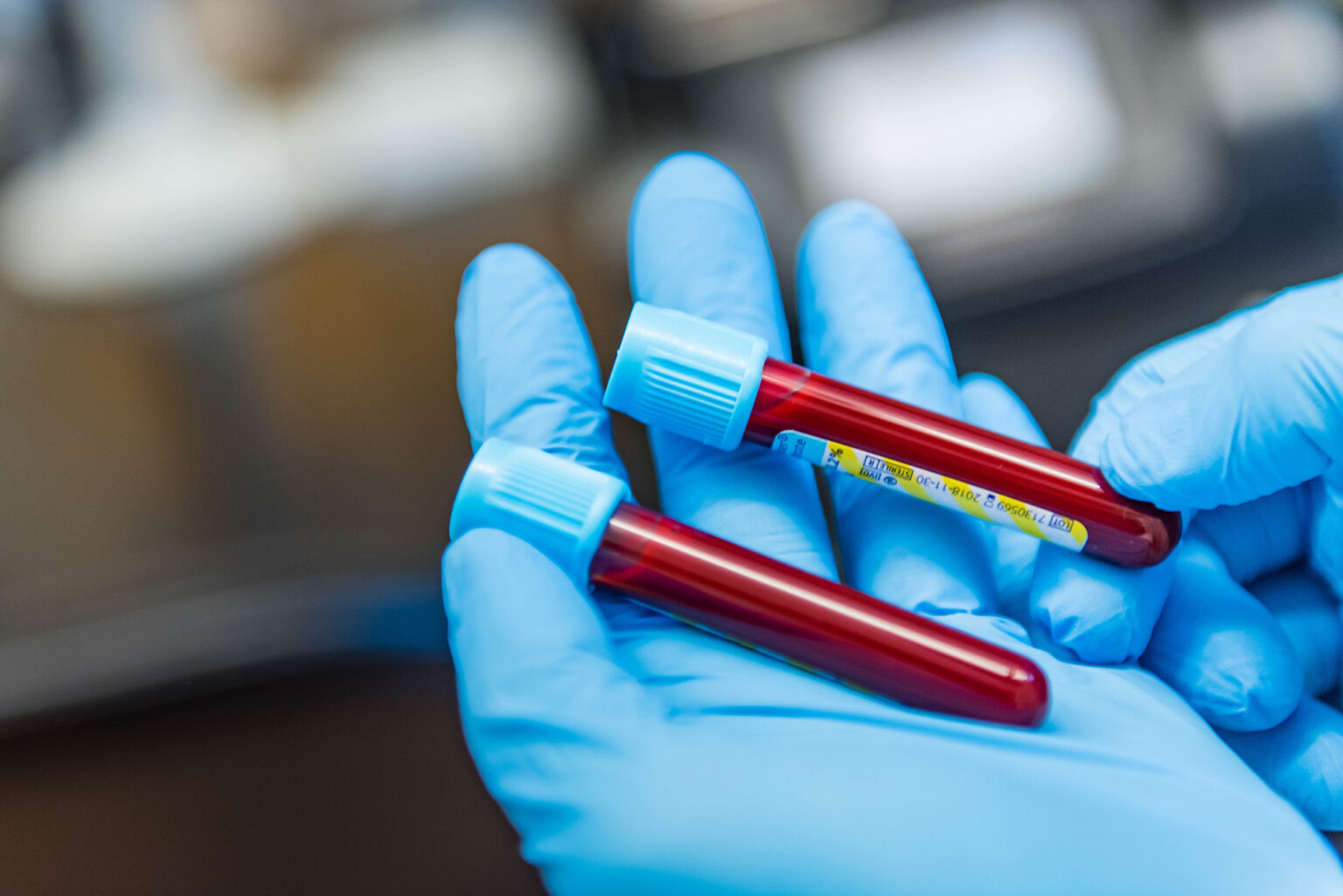 Blood collected in vials at the Michael Smith Laboratories.

In the Withers lab conversion process, enzymes remain floating in the liquid, mixed with the converted blood. This presents a challenge for regulatory approval for clinical trials on humans. Given that the original DNA of the conversion enzymes came from bacteria there is a chance it could create an immune response or side effect when used in a transfusion.

“To the U.S. Food and Drug Administration, we’re introducing two different substances — modified blood cells and the conversion enzymes — which is chemically complicated,” says Dr. Kizhakkedathu. “We could evaluate the toxicity of the enzymes, but removing them is much easier.”

Centrifugation could be used to separate the conversion enzymes from the red blood cells — but the process can be time consuming. To avoid that, the team is developing a filtration device that would capture all the enzymes used for conversion.

“So instead of getting regulatory approval for using a molecule as a drug on humans, we’ll be asking for permission to test a medical device. Regulatory pathways are generally easier for devices compared to drugs,” Dr. Kizhakkedathu says.

The filtration device has drawn the interest of the U.S. Air Force, which is funding part of the research.

The Golden Hour is a term for the period after a critical injury where there is the best likelihood that medical intervention will prevent death. Bypassing the need to separate red blood cells for transfusion would allow wounded soldiers on the battlefield to receive converted blood. Within 30 minutes, blood from a donor could be passed through the device and transfused into a wounded soldier. The process also has applications in the case of disasters and in remote communities.

“It’s lifesaving,” Dr. Kizhakkedathu says. “Think of towns in Nunavut where only a few hundred people live. There’s not going to be a blood bank. The blood has to be flown in and stored. If there were an enzyme filtration device there, people could convert any stored blood into the universal blood type.”

“We’re very fortunate in Canada that we have an excellent blood bank system — hospitals are good and blood is available. In some places in Africa and Asia, where resources are limited and they don’t have the same infrastructure, this could be extremely useful.” 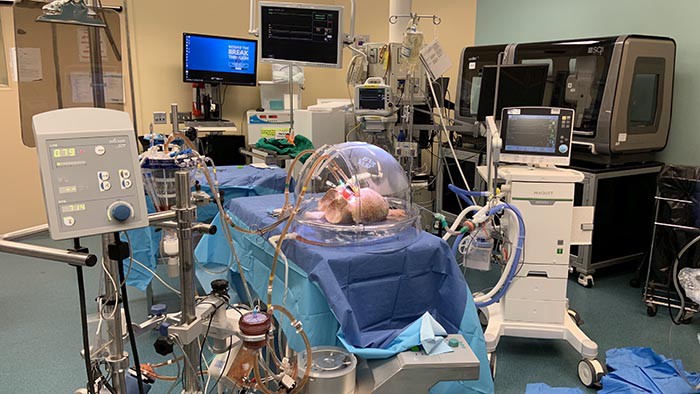 Donated lungs in the ex vivo Lung perfusion circuit during the clinical trial of the converted universal type O blood.

Because a major portion of people are blood type A and can also accept type O organs, O patients wait on average twice as long to receive a lung transplant. That translates into a 20 per cent higher risk of death for type O patients waiting for a matched organ. The disparity exists with other organs for transplant, where a patient who is type O or B in need of a kidney transplant will be on the waitlist for an average of four to five years, compared to two to three years for types A or AB. If all donated organs are converted to universal type O, the inequity is eliminated.

An opportunity arose early in 2022 to conduct a trial to convert blood group antigens on living human lungs from a type A donor that were not suitable for transplantation. Donors and recipients must have matching blood types or the recipient’s body will reject the transplanted organ.

During the trial, performed by Dr. Marcelo Cypel, surgical director of Toronto’s University Health Network, the donated lungs were kept “alive” using a perfusion system that pumped nourishing fluids through the organs. One lung was treated with enzymes to clear the antigens from the surface of the organ, while the other lung, from the same donor, remained untreated.

“It’s actually a very simple process,” says Dr. Withers. “When an organ is transplanted, it’s often put on a perfusion device, which circulates organ storage solution around that organ to keep it in good shape prior to its transplant into the patient. During the time that it’s being perfused we can simply put a little bit of this enzyme in that mixture, and it beautifully does the job of removing all the antigens from the organ’s surface.”

“That was the first demonstration,” Dr. Kizhakkedathu says. “It opens up a new way of thinking in transplantation as well as in transfusion. Our company Avivo is now working with people on converting kidneys, hearts and other organs.”

Avivo’s blood conversion technology is based on decades of basic research funded by CIHR, NSERC and others.

Written by Geoff Gilliard for UBC’s Faculty of Science