A Medicine by Design-funded research program that aims to generate next-generation cellular immunotherapies has seeded a Canadian biotechnology success story with the closing today of an $85-million (U.S.) Series A financing by Toronto- and Vancouver-based Notch Therapeutics, Inc. (Notch). 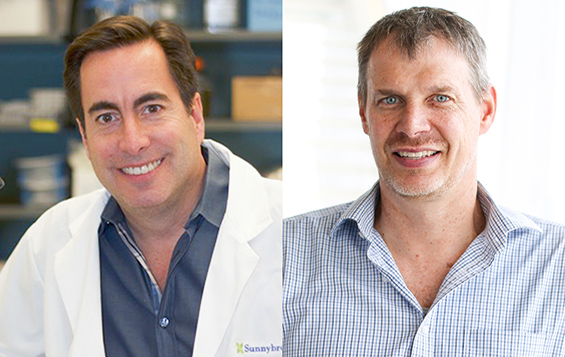 Juan Carlos Zúñiga-Pflücker, who leads a Medicine by Design team project focused on immunoengineering, and Peter Zandstra, former executive director of Medicine by Design, co-founded Notch in 2018 based on their labs’ research. Notch’s platform technology is developing renewable, stem cell-derived immunotherapies for cancer and autoimmune diseases such as diabetes.

“Medicine by Design’s initial investment in our discovery research has been instrumental in several of the key breakthroughs that laid the foundation for the creation of Notch,” says Zúñiga-Pflücker, a senior scientist at Sunnybrook Research Institute and chair of the Department of Immunology at the University of Toronto (U of T).

“With today’s announcement, we are taking the next steps toward expanding Notch’s product development capabilities and increasing operations to industrial scale so that we can advance our pipeline toward the clinic and creating a new generation of cell therapies that could transform health outcomes for many patients,” adds Zúñiga-Pflücker, who also chairs Notch’s scientific advisory board.

Zandstra, who is director of the University of British Columbia’s School of Biomedical Engineering and the Michael Smith Laboratories, serves as Notch’s chief scientific officer.

The financing was led by a healthcare-focused investment fund, with participation by existing investors Allogene Therapeutics, Inc., Lumira Ventures, and CCRM Enterprises Inc., and new investors EcoR I Capital, an undisclosed leading global investment firm, Casdin Capital, Samsara BioCapital, and Amplitude Ventures, according to a company news release. The proceeds will support the continuing development of Notch’s portfolio of cell therapy candidates and the clinical readiness of a proprietary technology platform for developing homogeneous and universally compatible stem cell-derived cell therapies. It will also enable the company to establish operations in Seattle, in addition to the company’s existing operations in Vancouver and Toronto.

Since 2016, Medicine by Design has invested almost $2.5 million in the immunoengineering team research program, led by Zuniga-Pflucker. The team seeks to address the underlying biology of complex disease systems. These pioneering foundational investments have been a catalyst for Notch’s creation and ongoing success in the Canadian biotech sphere.

Michael Sefton, executive director of Medicine by Design and University Professor in the Department of Chemical Engineering & Applied Chemistry and the Institute of Biomedical Engineering at U of T, says that Notch demonstrates the translational success that can come out of pioneering and early-stage investments in platform research.

“Notch is a success story for Canada’s biotechnology ecosystem,” says Sefton. “Medicine by Design supported the foundational research that led to the creation of Notch, key partners such as CCRM and Toronto Innovation Acceleration Partners (TIAP) incubated the company, and now Notch has attracted private-sector investment that will take it to the next level. It’s a strong example of how Medicine by Design’s investments in fundamental research can lead to transformative therapies and products that have a real impact on human health.”

Sefton pointed to the launch this week of Medicine by Design’s $4-million Pivotal Experiment Fund as a key development in advancing more regenerative medicine discoveries toward impact. The PEF is being advised by an investment review committee that includes members from Amplitude Ventures, CCRM Enterprises Inc. and TIAP, three of the investors involved in Notch.

“A top priority for Medicine by Design is to help more of our research teams translate their discoveries into therapies, products or enabling technologies,” Sefton adds. “The Pivotal Experiment Fund will help bridge the ‘valley of death’ between research funding and private-sector investment and create the conditions for more companies like Notch to emerge.”

This story was originally posted by Medicine By Design.